Every birth on a farm isn’t perfect, everything doesn’t always go as planned – I know right, you’re stunned! 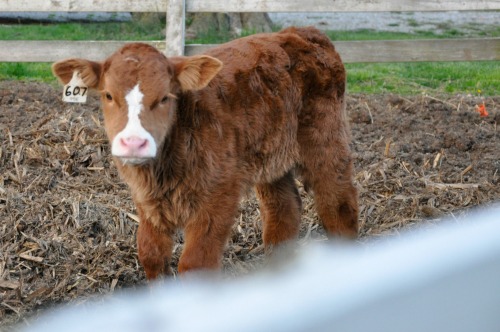 Pete is a Simmental bull calf born February 17.  He was a twin, which isn’t ideal and not overly common.  Estimates vary on the number of twin births in beef cattle, one study puts them at .5% or one in every 200.

Just like in humans there is minimal space in the womb, so multiples mean less room for moving around and stretching out.  Pete’s twin didn’t leave him enough room to stretch so when he was born he had contracted flexor tendons on all 4 legs.   Basically the tendons right above his hooves were not relaxed enough to let him walk on his hooves, they would knuckle under.  Poor Pete, that meant that he couldn’t stand and if a calf can’t stand it can’t nurse.  Animals need colostrum to survive and calves should be up and nursing on the cow within 2 hours of birth, this wasn’t going to happen for Pete so we came to his rescue. 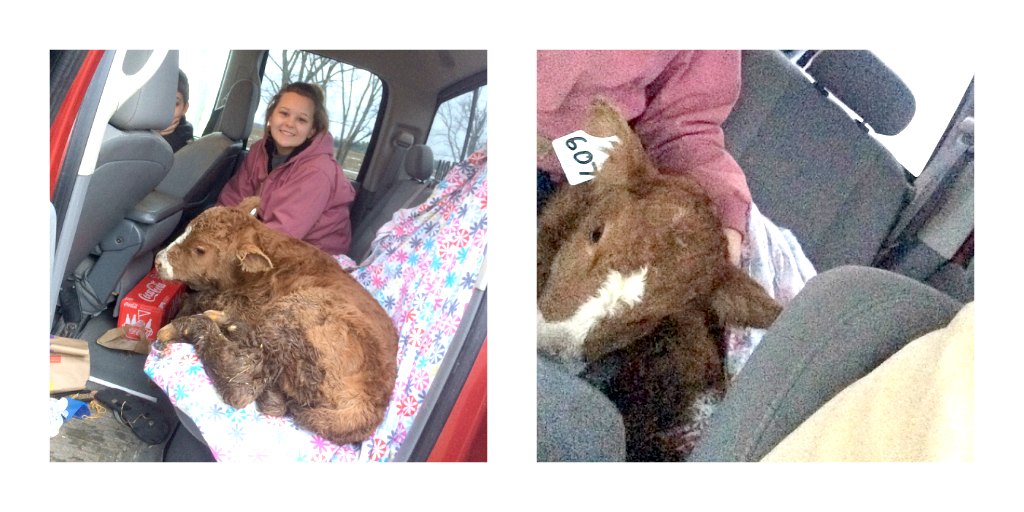 He literally got to ride home in the back seat of my pick-up truck!  We put a sheet on the seat and loaded him up!

First and foremost we made sure he drank a whole bottle of colostrum replacer.   After this first bottle she and I spent several hours massaging and warming those tendons.  Yes, we warmed them with my hair dryer, at least we took it to the barn and didn’t bring Pete in the house.

He was a feisty little guy, which helped, he really wanted to stand!   Within 36 hours he was up on all 4’s, a little shaky and every now and then a hoof would want to knuckle under, but in no time at all he was up and strong!

Now Pete lives the spoiled life of a bottle calf and he will until he is weaned.  He will then be returned to Keegan, put on full feed with calves his age where eventually Pete will weigh in at 1200-1300 pounds.  What I love most about this girl of mine (and really all farm kids) is the caring effort they put into livestock with the full knowledge of why we raise these animals.  It’s a job that takes heart!

Pete’s journey has taken on a life all of it’s own, I went from sharing his story on my personal Facebook page to Pete having his own Facebook page to a reporter in Ireland picking up the story!